When I first started listing on Etsy, I had just been laid-off and was, literally, pulling items out of drawers to see what would happen.  What happened is I sold stuff.  And I liked it.  I have sold on that "other large and popular on-line site" for years - since they began in 1997.  But, that had lost it's charm long ago.  Selling vintage on Etsy is fresh, it's still fun. If I avoid the anger of the forums (not that I have not fallen-in there!) I am good.  People are nice.  Even I am nice, and that's a good thing.

I found my first model sometime last April and we have been together ever since.  Her name, according to her signature, is Anne.  She signed the photo in 1927.  She has the most lovely eyes - and boy can she sell!  I think I could photograph a rock next to her and people would say "What a great Art-Deco rock that is!"  I still use her regularly, and here she is: 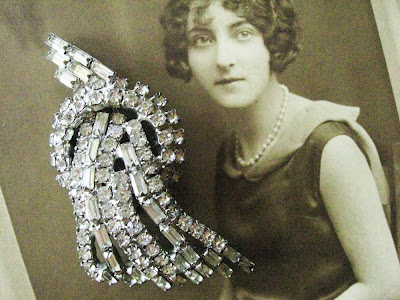 I am not the first to use an old photo to sell on Etsy and I won't be the last.  I can say that I did not deliberately steal an idea, but, it is certainly possible that I saw someone else do this and it was tucked away in the back of my mind when I found Anne.  She was in a large lot of images I bought at the local flea - many of which I sold in my shop - but she was a "model" from the beginning.  Since then, I have looked for more models, and, those of you who frequent my shop will recognize at least a few: 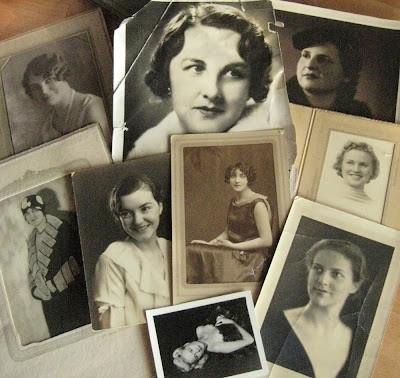 I like to match the time period of the jewelry with the model.  I also match the type of jewelry to the model.  For instance, the model to the left of Anna has the sweetest face imaginable!  Who can resist her?  She helps me model pretty, wedding items and delicate pieces.  Maybe some of you have been smitten by her charms?  Now, I need to keep this on the QT, because, the models above are not yet aware.  I did, however, find some new potential models today.  This is, as you know, part of the business.  Modeling is a career for the young, and, new faces must be added all the time.  The group of women I found all graduated from high school in 1932.  I admit, I picked the pretty girls.  I mean, this is business!  But they are a lovely bunch, and, will likely make their modeling debut over the next few weeks.  Make them feel welcome, as many of them are quite nervous.  Not the one in the hat, however.  Her name is Viola and I think she can handle anything! 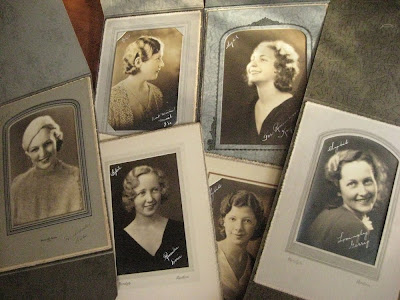 Posted by Carmen and Ginger at 7:41 PM