But I'm Always Here Looking At This Stuff...

Earlier this week an old friend of mine wrote to me and asked if I could help her put together a last-minute Halloween Costume for she and her husband who had just been invited to a party.  I was at once flattered, but, also mortified, as she cited all the 1960's and 1970's items in my shop as her reason for thinking of me. 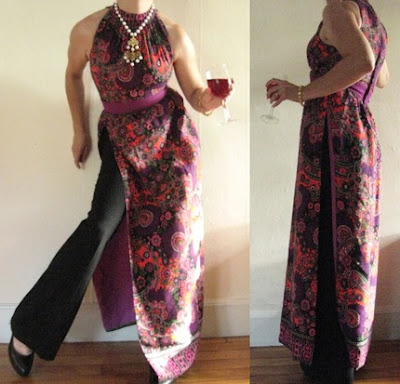 I mean, the stuff in my shop is not costume, right?  It's vintage fashion.  Right?  RIGHT? 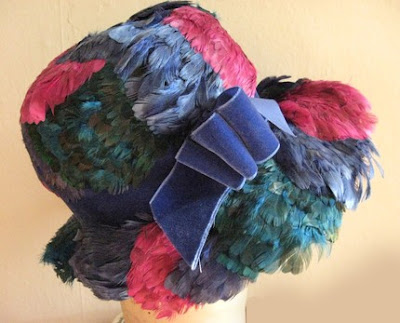 But the more I thought about it, the more I realized how wrong I was.  I was taking it all a bit too seriously.  I mean, if I expected someone to buy this hat to wear daily, I really did NOT know my audience! 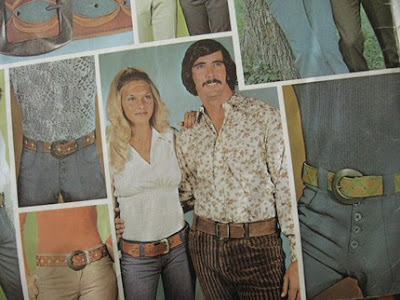 ...and someone who posts this montage to sell this book on making leather belts certainly appreciates the contemporary humor of some past styles.  I thought about it a minute and suggested a "Sonny & Cher" theme.  She liked the idea, so I snapped some pics of this outfit I just happened to have and had not yet listed in my shop:

You also happen to have this outfit hanging around somewhere, right?  I assembled some vintage goodies for her husband (A decidedly masculine guy who works in Construction - just getting him to wear something pink will be costume enough!)  and am whipping up some custom matching headbands.  I hope it all comes together for them and that they have a great time.  I love costume wearing, and, am more than mildly jealous I have no Halloween party invite of my own. 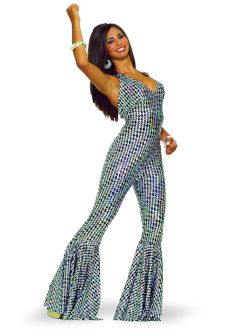 I like the Sonny & Cher idea as it uses vintage items, but, is also rooted in cultural history.  They can ham it up, carry microphones, sing songs, or whatever they like to make it clear who they are pretending to be.  Since the Sonny & Cher Show was intentionally campy, it makes it that much more OK to poke some fun at the pair. What I don't understand are these retro inspired "costumes" you see everywhere with names like Boogie Dancin' Babe.  I mean, this is not that far off from something Britney or Christina might wear in concert.  Why is this a costume?  It seems over the past ten or fifteen years that Halloween costumes for women should just be labled "Reason-To-Wear-Something-So-Revealing-I-Could-Never-Get-Away-With-It-Without-Looking-Like-A Sex-Worker-If-It-Were-Not-Halloween" Costume.   I mean, I'm all for sexy, and, I'm all for Halloween.  Maybe, murdered Boogie Dancin' Babe - with an axe coming out of her head would be more clever?

I give SAVERS a lot of credit for what they've done with Halloween.  Many people still trek to Thrift shops in search of Halloween costumes.  (It's so dang crowded at all of them this week - and all the good stuff is gone!)  SAVERS has embraced this audience and run with it!  They now seasonally stock discounted Halloween costumes and accessories making them a one-stop shopping destination for all your bargain Halloween needs.  They even have sections of their web-site highlighting not only pre-fab costumes they stock, but, costume ideas for using vintage clothing.  I find this to be very clever on their part.  Of course, the guy above probably made it harder for me to find good "Sonny" accessories at SAVERS this week, but, I like a challenge. 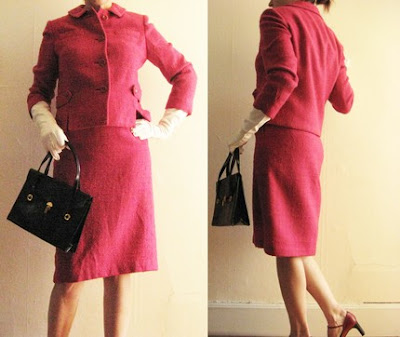 So, I'll take a deep breath and TOTALLY deal with the fact that this killer pink Mad Men suit was purchased as a Jackie O Halloween Costume.  I mean, I went as Jackie-O in vintage a few years back...there is NOTHING wrong with that.  And...those killer vintage heels, black bag and vintage jersey outfit that was needed for a costume, no problem!  And those sexy long black gloves sold for a costume -  breathe - I'm totally fine with that.  Really. 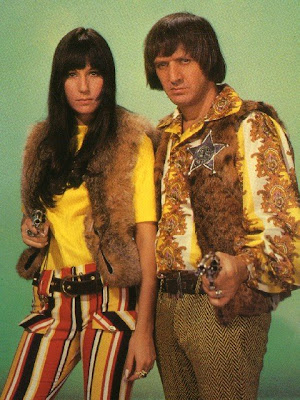 Posted by Carmen and Ginger at 4:34 PM