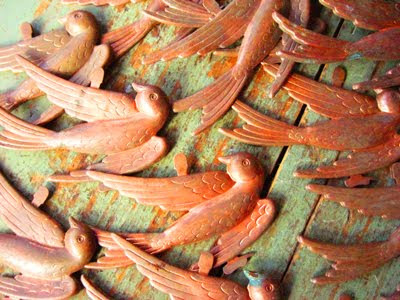 If you'd told me a couple of months ago that one of my blog titles would be "little metal birds" I would have thought you were nuts.  But here I am and here they are - from three different sources! 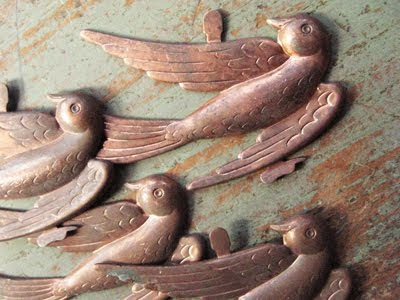 Although I already had some incredible items (see below), the catalyst for this post came two weeks ago when I stopped by the local Sunday Flea.  I had not been there since the summer, and, the season was down to the last scheduled event, so, I decided to stop by.  As I was literally walking away from one table of  jewelry in little baggies jammed into giant plastic tubs and explaining to the seller that I just did not have the patience to look at jewelry that day, I walked over to the table of these beauties! 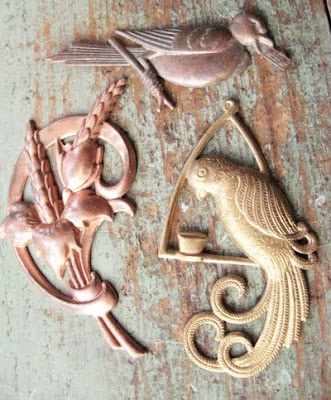 The seller was a "metal guy."  Non-stop monologue about all his crap, cigarette hanging out of his mouth, annoyingly loud, shrewd and well-connected.  He had low boxes filled with jewelry findings.  Old, filthy, jumbled jewelry findings nestled in with mounds of dirt and dust.  He explained that it had all come from the floor of a former jewelry company in a building that was set to be demolished.  (Another sad Providence commentary for another blog post.)  The guys had called and asked if he wanted it; he said "Yes" and they swept everything they could find into a corner for him. 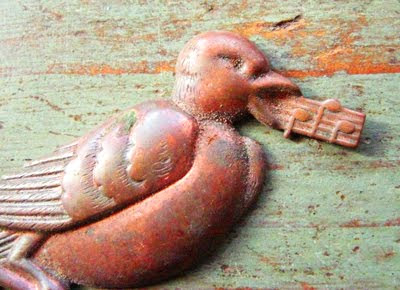 I'm not too ashamed to say that I stood there and poured through the stuff for a good 45 minutes.  I endured his stories, his cigarette smoke, and, the fact that when we tallied up the 100+ pieces I'd purchased, he thought I was flim-flamming him and wanted to start all over again.  (I was not.)  For me, it was the birds.  I love birds, and, where am I going to find these beauties again?  I love the old patina on the unfinished metal.  So so beautiful!  The songbird and parrot above are one of a kind.  Each measures over 2" tall and I simply bought them to keep.  The flock of birds above and below I am hoping to use in creations for Hang Out A Shingle. 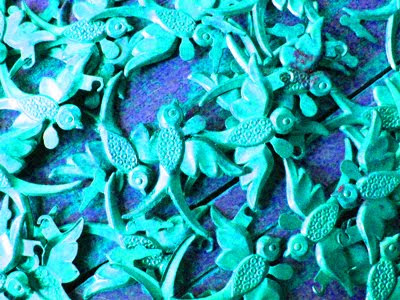 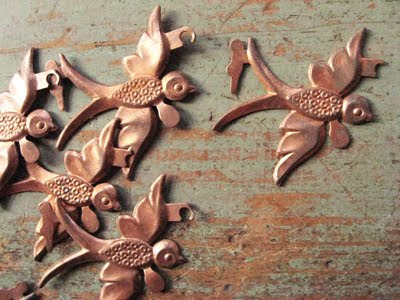 They are just fun to photograph and look at, no?  I paid $1.00 each for a few, $.50 each for half and $.25 each for the other half.  This adds up fast, though, with these little things!  (Husband, ignore this part) I think I handed him $30 before walking away with my score.  I did find others though.  Others that are not shown here and are tucked away to be sold at Carmen and Ginger after the new year.  I am going to do nothing but tease, but, if art nouveau stampings and Scottie Dogs are your thing...keep watching in 2010! 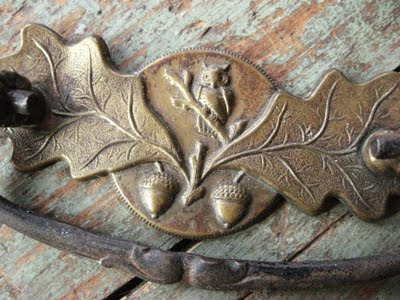 Amazingly, I had also just found these two other items I was thinking of posting.  This handle above is divine!  Look at that owl and acorn motif!  I found this at a shop in Connecticut near where my now-husband/then-fiance lived.  I paid a few dollars for it.  I keep thinking I will install it in the house somewhere, or, on a piece of furniture but the right place has not yet materialized. For now, I'll just enjoy its beauty. 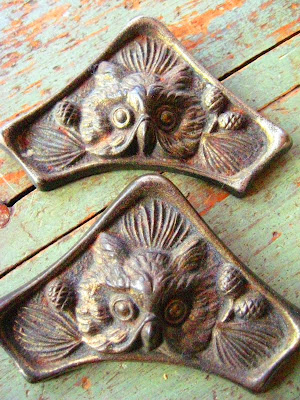 ...and these guys.  Holy cats!  More owls and acorns.  These are corner pieces.  I found them at the same local Flea as the stampings, but, much earlier in the year.  The fellow I bought them from said "I had a ton of them but another guy bought them all this morning.  I found these after he left."  Sheesh!  By a whisker, as they say, I found this pair.  Or, by a beak, or a pine needle.  I think I know where these will go...but, for now...just considering...
Posted by Carmen and Ginger at 9:17 AM

Email ThisBlogThis!Share to TwitterShare to FacebookShare to Pinterest
Labels: Collections, Costume Jewelry, Flea Market, My Stash, Scottish Terrier, Vintage Shopping, What Do You Keep?, Where Do You Find That Stuff?