Thrift Score - From the Master (Mom) 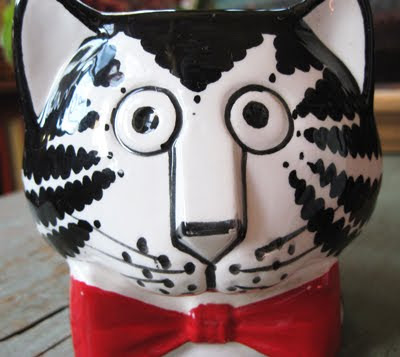 After last week's Thrift Score Post, I had a flurry of interest and invited people to submit their own stories.  My mom had posted her story as a comment but I wanted to move it front and center.  My mom of course has been, and, continues to be my Thrift Mentor!  My oldest recollections are of the Giant Rummage Sales at Temple Beth El in Quincy, Massachusetts back in the early seventies.  Mom actually was able to get me excited about looking through other people's used stuff!  Since we did not have a lot of money, I quickly found the potential for finding things I otherwise could not own. Sparkly tutus, ballet shoes, and other such costumes were things I fantasized about as a child, but, my parents could not afford (I never became a Prima Ballerina but as a girl liked anything with sparkle!).  At $2/bag however, anything was fair game!  Here then, is a first-hand account from "The Master." 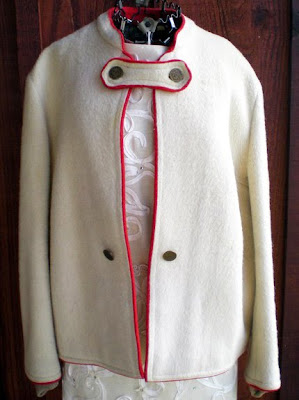 You asked people to post some Thrift Scores that they had. I thought you would have a lot of people wanting to share, but you have not so I will be the first. I love to share my scores as you know and I have many things around the house that were big scores that I love, but I am only going to tell about two things.

Your Dad loves to tell the story of when I bought the Loden Coat from Austria at the Rummage Sale in Quincy for 50 cents. I wore it for every winter for about five years and then I took it to a consignment shop and sold it for $10.

The one score that really made an impression on me though was when I first started selling on eBay in 1997 (thank you Claudia for telling me about eBay). Up until then I had sold things in Group Shops and had always looked for Antique items to sell. I had not really considered the collectible market. Well, I bought a set of Kliban Cat Salt and Pepper Shakers at a yard sale for $2.00. They had never been used and had the paper labels on them. They were cats with fish bottoms or backsides. I listed them on eBay for $9.99 and thought that they would be great to make a few bucks on. Towards the end of the auction I started getting phone calls from people who knew I had listed them and they told me I had better check them out. The price kept going up and up and they ended selling for over $500. The couple in Texas who bought them couldn't wait to get them and loved them when they did arrive. It turns out that these were very rare and completed the collection of Kliban items they had.

That started me in another direction for finding items that I had not previously thought about.

Hope you have not fallen asleep reading this, but thought it might be of interest to some. 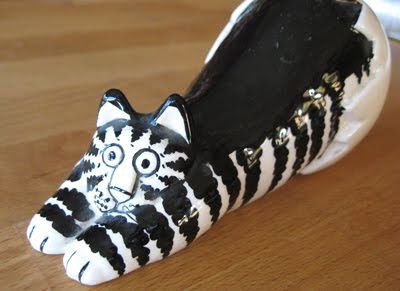 Thanks Mom!  You know, I scoured the internet, SCOURED, and could not find a photo of those fish cats.  I guess they are still pretty darn rare.  To supplement the story, however, I have added some pics of a couple of Klibans I happen to own.  They are just so darn cute!  Imagine the one above with a fish tail instead of an egg-butt, and, a partner, and, you will imagine a $500 pair... 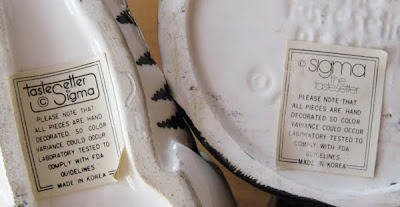 If you are thinking about investing, here is a shot of the paper labels on these two items.  Always helpful in both a) determining that they are truly from the 1970's and not newer items and b) providing this proof to your buyers.  I'm not sure that these items are quite commanding the same prices at the moment as a few years ago, but, what is?

For some more examples of my Mom's mad skills, click the links below to see some of her latest Etsy offerings! 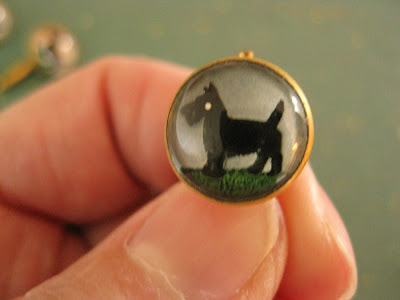 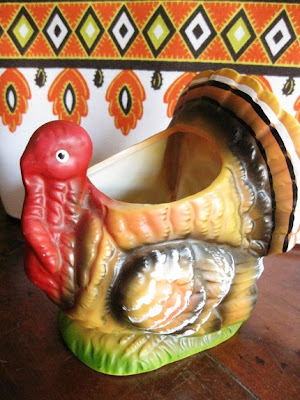 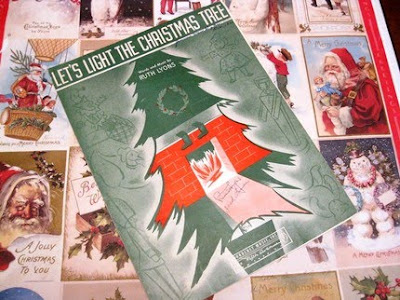 Posted by Carmen and Ginger at 9:44 AM

Email ThisBlogThis!Share to TwitterShare to FacebookShare to Pinterest
Labels: 1970s, 1980's, Etsy, On-line Selling, Thrift Score, Where Do You Find That Stuff?