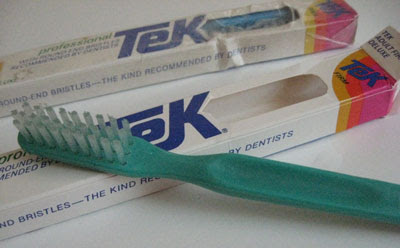 While staying at my parents' home this past weekend, I realized I'd forgotten my toothbrush at home.  Knowing their tendency to pack away extra supplies of such things,  it did not take me long to find a couple of boxes of extra brushes in the bathroom drawer. 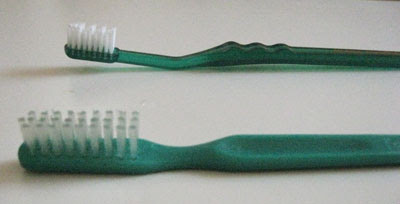 While I laughed at the fact that the rainbow packaging suggested the brushes had been saved since at least 1982, I was unprepared for the lack of sophisticated design of the brush!  In fact, I was somewhat scared of it!  The relatively massive head and short, straight handle made it very difficult to control.  Also, the fact that my dad used to always buy "Firm" brushes (as opposed to the soft-brushes-only advocated by today's dentists) made this feel like I was using a bottle brush on my teeth! 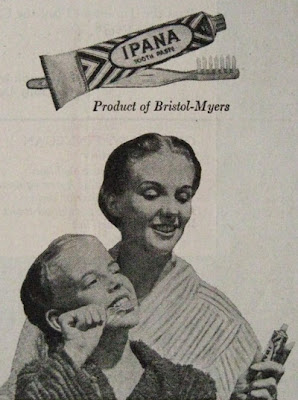 I grew up in the 1970's so, watched and experienced much of the toothbrush revolution that occurred during the 1980's.  Brushes became longer, more angled, with smaller heads and more specialized bristle forms.  These transitions came along slowly but steadily, so I had lost all appreciation for my modern toothbrush until I was forced to use this substitute over the weekend!  This got me thinking about changes in the decades before, and, it looks like they did not change much.  This Ipana ad from the late 1940's above shows a brush similar in design to the 1982 Tek-of-torture from my weekend, as does the basic (yet lovely!) Pro-phy-lac-tic Brand Brush from my own stash of construction objects below.  I found the ad on a mechanical site where they referred to it as "using sexual innuendo in advertising."  I've got news for you, a condom IS a prophylactic but so is a toothbrush, brother... 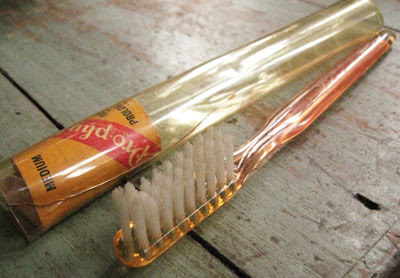 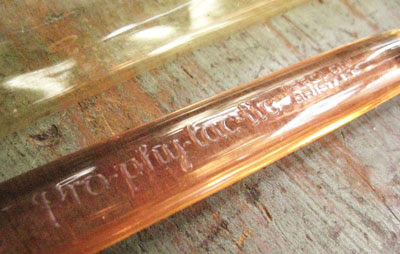 Posted by Carmen and Ginger at 1:50 PM