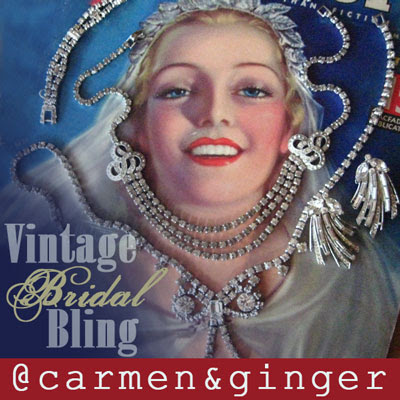 We are returning to our "roots" this week at Carmen and Ginger.  Last year, it was vintage rhinestone jewelry that really put us on the map.  We listed, people loved, we listed more!  A boost in an Etsy Storque Article was a real eye-opener to both the popularity of vintage rhinestone jewelry and the power of being included in an Etsy Storque article!  (I was visiting my parents for a couple of days when the article, unknown to me, was published.  Everytime I clicked on my shop I'd sold 5 more things and had 8 more messages from people wanting more!) 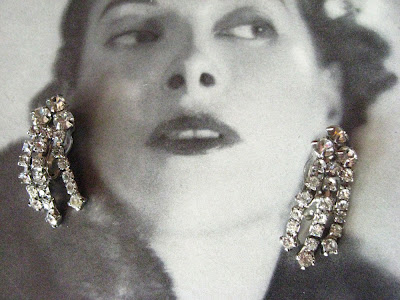 This week we've got great stuff, and, great pics of course!  Our best models are out in full force, ready to entice you to buy!  The listing above is already in the shop; the next three below are soon to be listed... 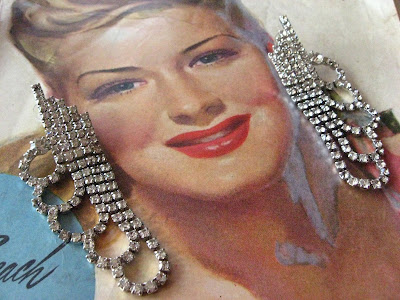 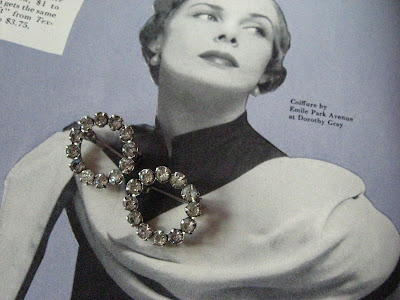 All the "bling" in the first and last advertising pics are for sale as well; some already listed with much more to come.  We have plenty of earrings, necklaces, bracelets, brooches, hair adornments, cufflinks and more!  All gleaming clear rhinestones for your wedding, prom, or, to just look fabulous doing the laundry!

The opening image is currently running as a sidebar ad on OffBeat Bride.  This bottom image was created as an ad to soon run on Craft Cult.  I was in the middle of photographing all the necklaces one at a time on my beautiful vintage 1920's dress form and as I finished, I kept layering them on another form.  I realized how fab they all looked together, so once I was done with the individual pics, I layered tham all back onto the 1920's form for this shot.  I think it looks pretty damn cool, don't you? 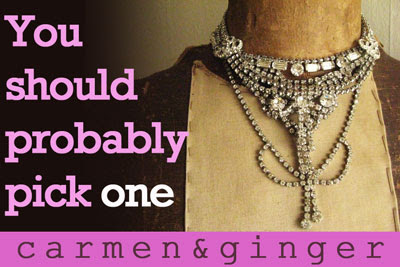 What are you looking for in vintage rhinestone?  What always sucks you in? Turns you off?  Do tell, we need some comment love here on our C&G blog!
Posted by Carmen and Ginger at 10:27 PM 5 comments: 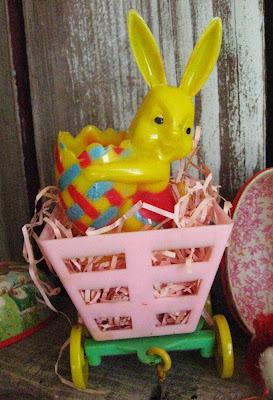 C&G
The School House Candy Company, also known as the E. Rosen Company, or, ROSBRO Plastics, based on the Pawtucket and Providence line of Rhode Island (about a ten minute walk from my house here on the East Side of Providence) was founded in 1912.  For years it produced candy and packaging for candy on delightfully printed cards and, in famously collected plastic containers.  Holiday candies and packaging were their specialty.   It went into receivership in the summer of 1998 and was bought out by Sherwood Brands for 4 Million dollars later that same year. 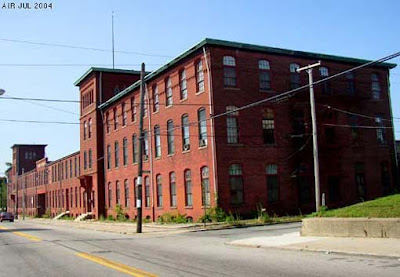 Photo courtesy RI Art in Ruins
Plans to renovate the building which is part of a larger historically-significant manufacturing complex in Pawtucket have been ongoing for the past several years.  While it started off strong, the economic downturn which sadly kicked-in within a year after the momentum had started, has slowed progress and development significantly. 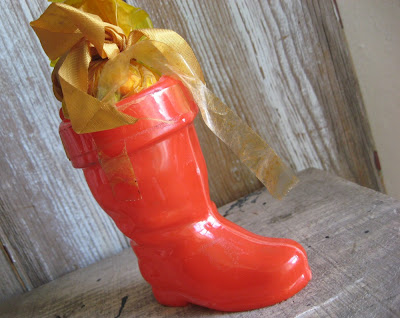 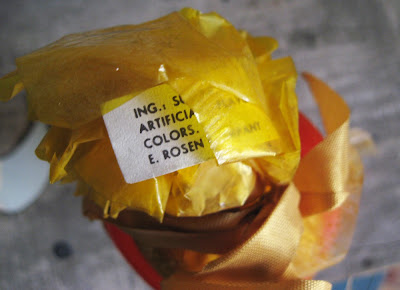 C&G
For now, the legacy of the company is found in personal stories and, the non-degradable containers (and sometimes non-degradable candy!) they produced.  Some of the most popular collectibles are the mid-century hard plastic Christmas candy containers.  Party because they are the most frequently found and thus most easily collected, and, partly because most were made with a loop for hanging so that once the candy is gone they make delightful tree ornaments.  Mostly, however, the Christmas items are just so vast and adorable, people get sucked in by the ability to amass a sizable and impressive collection of reasonably hardy yet colorful vintage decorations. 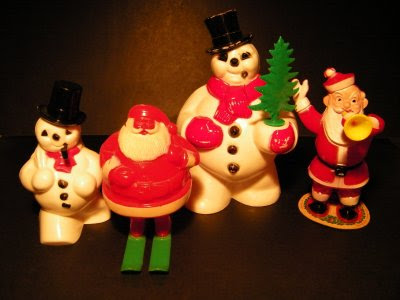 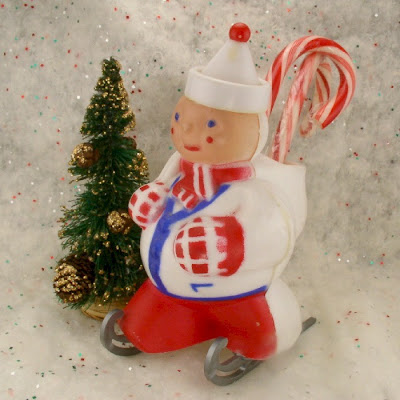 Holiday Kitsch Klatsch on Etsy
Of course, anything that is more difficult to find becomes even that much sought after by collectors.  This puts the Halloween containers into the "most fervently collected" category! 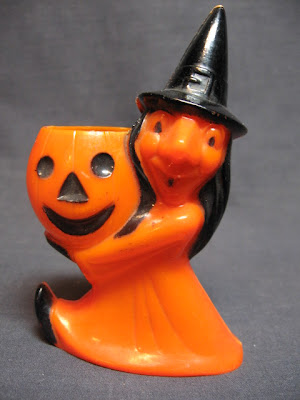 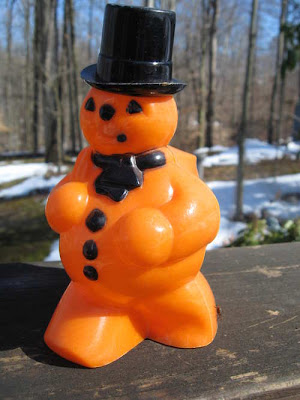 smick55 on eBay
One of the things I find so charming about the ROSBRO approach was that they would use the same molds, change a few colors and turn one holiday container into one befitting a new holiday in a jiffy!  Above is a great example of what clearly began as a Christmas-theme snowman, instead switched to an orange plastic body with black painted accents to make him an instant "Halloween" figure! 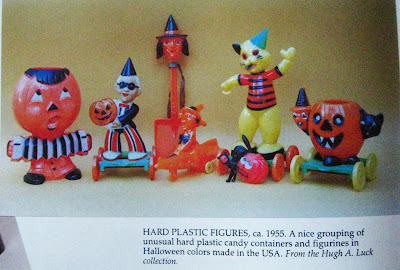 Photo courtesy of Halloween in America, by Stuart Schneider
The rolling wheeled bases easily turned any container into a "pull toy" thus increasing the marketability as gifts to children from parents, grandparents and the kids themselves.  The wheeled platforms are fairly generic across the holidays; you can see that those shown on the holiday figures above exactly match that shown on my first Easter Figure in this post.  As these things go, I have learned recently that the collectible nature of these more "complex" containers has of course spawned hybrid "reproductions" of sorts.  Some sellers are evidently gluing vintage hard plastic containers to newly created bases.  The details, with photos, are documented here.  Take a look and be mindful of this, especially if collecting off the web or, if something seems too good to be true! 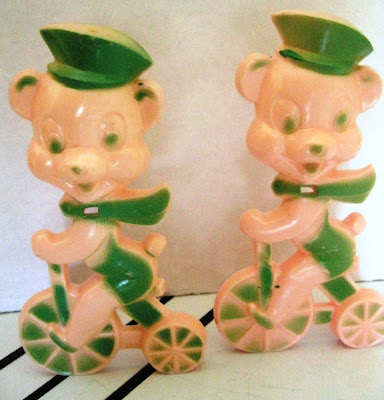 Find Me a Memory at Etsy
For now, there are many great options out there.  The hard plastic collectibles are more plentiful than other holiday collectibles as they were produced later, by machine and in non-destructible materials as opposed to the wonderful early paper products so sought after by holiday collectors.  These items, however, are no longer being made, many people are unaware of their value so they are discarded, and, while hardier than glass or paper, they are breakable.  All this combines to make them harder to find as time passes.  With Easter right around the corner, Etsy is bursting with some adorable Easter finds (and often at better prices than that nail-biting auction site!) Find some gems now to bring bright, colorful holiday joy to you and your family for many years to come! 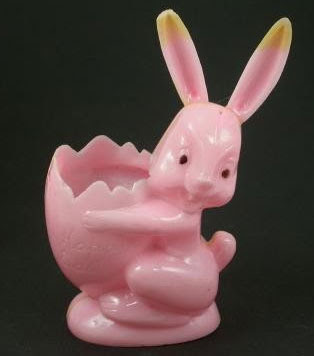 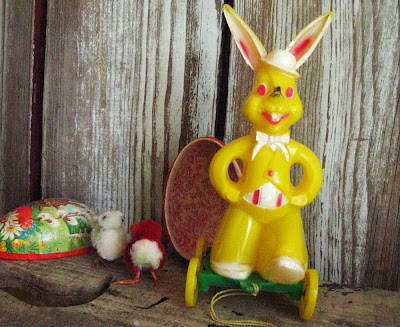 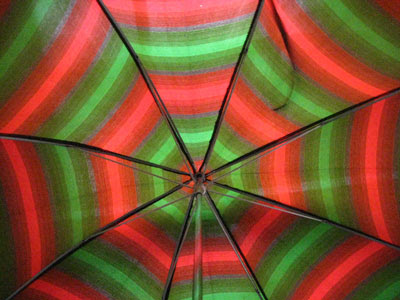 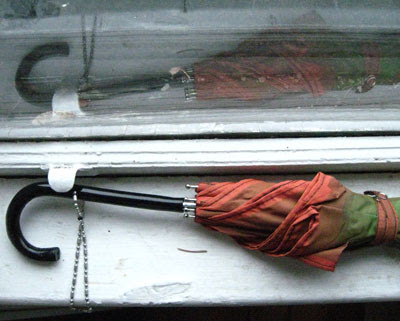 Seems like it's raining everywhere today judging by my friends' posts and comments on Facebook from all over the country!  A good day then to invite you under my new (old) umbrella. 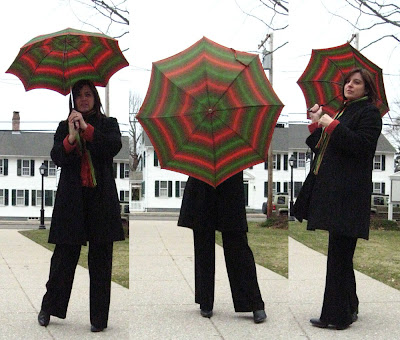 I tried to take some stylish shots a la my friend Eyeliah at Style Symmetry - boy does she make it look easy!  I fell in love with this umbrella because it combines my three favorite colors to wear; warm red, grassy green and black; all together into one woven cloth and wooden-handled gem! 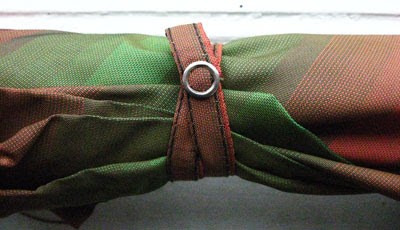 Look at that sweet little perfectly round snap closure detail! 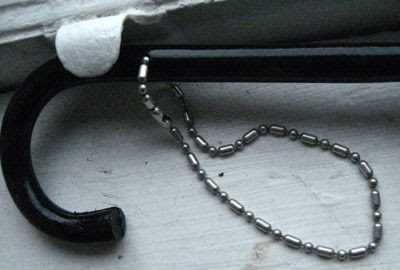 Even the ball-chain loop is special with its alternating round and rectangular shapes! 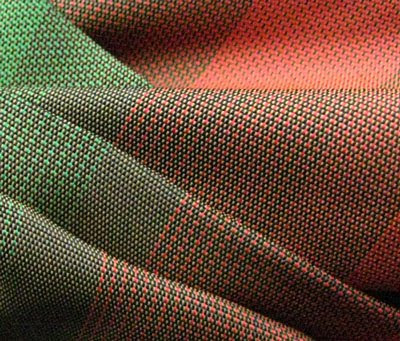 Ok, I know it is unnatural to be obsessed with a thrift-score umbrella, but, just LOOK at that weave! 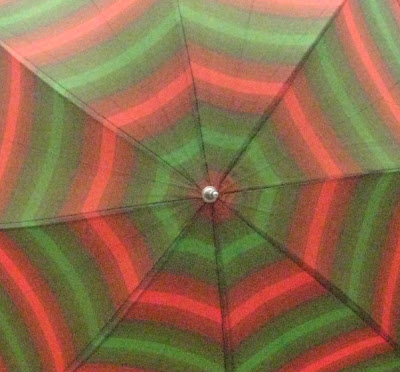 A thing of beauty for sure; to bring you joy on this otherwise overcast and dreary day.
Posted by Carmen and Ginger at 6:03 PM No comments: 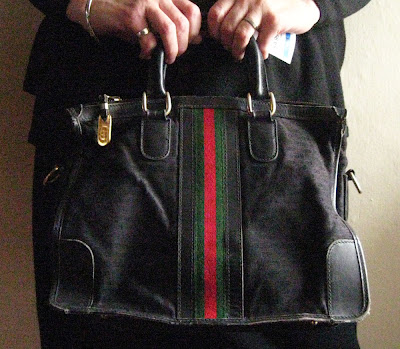 The most popular post to date on this blog was my Tiffany Bag find a couple of months ago.  Now granted, that bag also had my mother's initials already monogrammed into it, but, I thought today's find would tickle my readers as well.  Again, at that well-known North American Second-Hand Retailer, I spied this vintage 1970's Gucci bag this afternoon.  What tickles me most about these finds is comparing the items that they set aside, for higher prices, behind glass, compared to the items like this that just make it onto the racks.  They are so accustomed to seeing "fake" designer bags that when a real one comes along they don't even notice! Now, granted, this piece has seen better days and was used a LOT.  At less than $10, however, you just can't go wrong with an original Gucci!  I will likely place this bag in my shop, and, if you have any questions or wish to make an offer just drop me a convo!
Posted by Carmen and Ginger at 4:53 PM 2 comments: