Blockin' Out Some Time 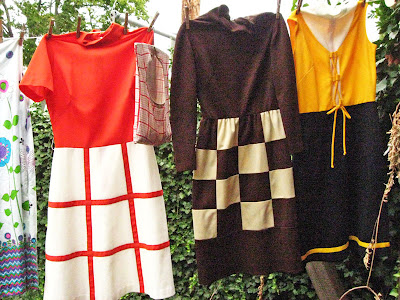 I like to list things in "themes" in my shop, even if no one else notices, so for my 2010 Fall Fashion Week at Carmen and Ginger, I decided to pull together a "theme" around mod and color-block designs.  I had assembled a great collection of dresses over the summer, many of them falling into this theme, so, paired along with the right accessories I'm hoping it will make a great impact for shoppers! 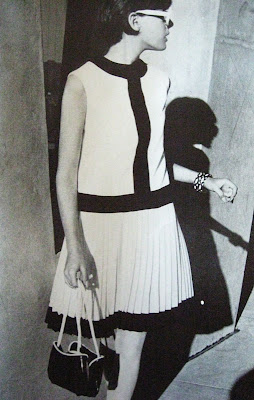 I was born in 1966 when the mod craze was really dictating the fashion market with large, simple shapes given to garments that were often further broken into zones of color. 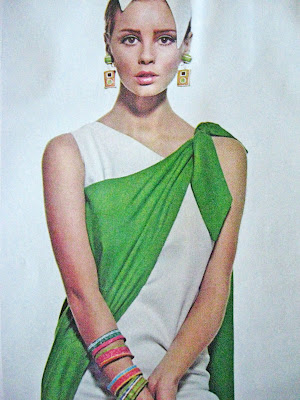 These photos are all courtesy of a 1966 Harper's Bazaar and are terrific examples of the trend in different forms at that time.  Above is an eastern-influenced garment. 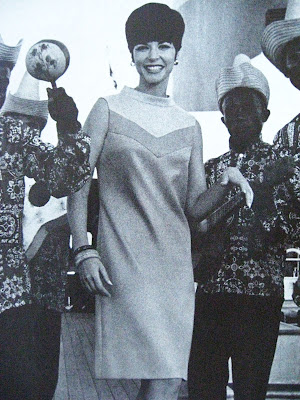 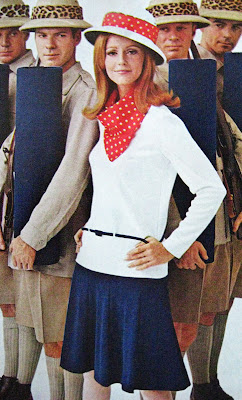 Simplicity of form, zoned areas and a splash of geometric pattern helped define the style. 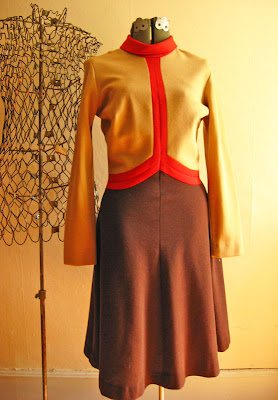 I found some fun pieces over the past few months and this knit dress is just one of them!  Has the look of wool but is actually a synthetic knit so I just popped it in the washer and hung to dry! 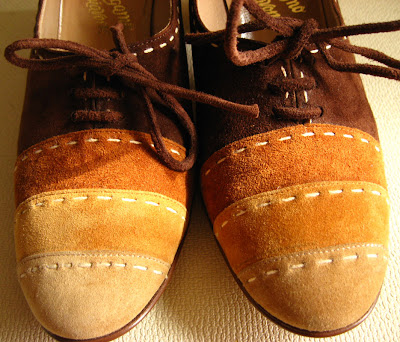 These Rodina Ferragamo suede color-block lace-up shoes are to die for! 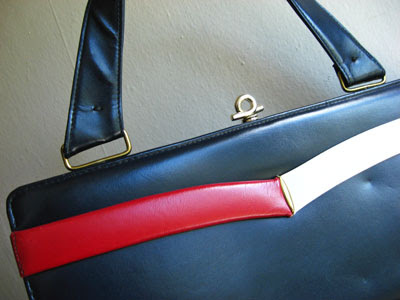 And what a sweet 1960's bag to compliment your mod look!
And let me just get on a soapbox here for a minute...  I was recently reading through a web-site devoted to vintage that provides on-line sellers with a wealth of information and tips.  As I was reading a do's and don'ts of on-line selling, however, I came across a statement to the effect of  "It makes me crazy when someone lists something as "Mod" when it is from the 1950's or 1970's."  Well, what if it IS mod but from the 1950's or 1970's?  Look, I'm all for advising vintage sellers to do their homework and to not purposely mislead people. Anyone in this business wants to maintain as much professionalism as possible.  I try my best but it is hard and I'm sure I make mistakes.  Unless I am really certain of something,  I typically list two decades of possible origin when I post something to let the buyer know that I have an estimate, but nothing concrete in hand for provenance.  I think it is harder for younger sellers to determine the age of something by the fabric, finish or tag style alone, which I honestly rely on through experience constantly as I shop and list.  It is really not OK, however, for someone to list something that was made in the 80's as made in the 1950's.  I mean, if you are going to sell vintage, you can do enough research to educate yourself that far!  But back to "Mod."  The term "mod" came from the modernist movement which originated in the 1950's. Mod is a design style, not a time period.  Although mod had it's heyday in the 1960's, it is possible to find ahead-of-their-time "mod" garments from the 1950's.  And since trends rarely define themselves to one time period, especially if popular, it is possible to see items that are a "mod" design into the 1970's and beyond.  With that said, I am proudly listing many "mod" items this Fashion Week at Carmen and Ginger.  Most are from the 1960's but a few are from the 1970's and you know what? I think that's just perfectly fine.
Posted by Carmen and Ginger at 1:33 PM