I entered a short story into the current Three Minute Fiction contest at NPR.  Evidently my piece was a little too simple to make the final cut for consideration so I decided to paste it here.  The rules defined the first and last lines and the maximum number of words was 600. 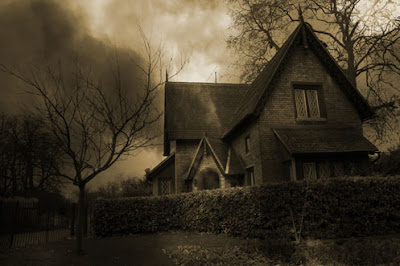 Some people swore that the house was haunted. I suppose there was a time when I’d believed that. But I was older now, and on a mission.
“Just go!” I prodded Billy with my pirate sword for emphasis.
“Ouch.” He turned and looked at me through his Batman mask.  “I, I c- can’t.” he stammered.
“Oh just go on already.” grumbled Ed, the largest of the three of us, and most impatient to get as much Halloween candy as possible. He gathered up his “ghost” sheet, pushed past me, shoved Billy aside, and walked through the gate.
As much as my bravado had risen moments before, I felt it diminish the second I passed through the gate.  The air seemed just a little cooler, the path just a little longer and the light a little dimmer at the porch.
“Are you sure they are, um, “open?” I said.
“Don’t you wimp out on me too Tucker.” growled Ed.
Billy and I followed along with me elbowing to stay ahead of him.
The bottom porch step let out a loud groan as Ed’s foot stepped upon it.
“Shh!” I warned.
“Shh! What?” he said, turning to stare at me through the two eye holes in his sheet.
“Um, I dunno.” I answered not quite sure why I’d said it myself.
Each porch step seemed to creak louder as we crept up the rickety stairs.
Ed stopped in front of the door.
“Go on, knock already” I whispered, not wanting to prolong the silence.
“All right” Ed said, raising his sheeted fist and knocking loudly on the large oak door.
We heard footsteps “tap tap tap” to the door inside.  I could see my breath in front of me and could hear Billy’s teeth chattering behind me.  Slowly the door creaked open on screaming hinges.  We could see a table inside lighted with candles and a plate of red apples.  This was where we were supposed to say “trick or treat” but none of us could make a sound.
“Boo!”  A shape appeared from around the door.
Ed jumped backward, immediately entangling his feet in his ghost sheet.  Unable to keep upright, he tumbled backward onto me, screaming, and, I in turn tumbled backward into Billy.  I could feel my pirate sword digging into my side and Billy beneath me.  Ed’s weight had me pinned beneath him.
“Get off me!” I yelled.
I could see the shape moving toward us in the doorway, a silhouette framed by the candlelight.
“Oh dear,” it spoke in a creaky voice, “I did not mean to frighten you boys so.”
Ed yelped, managed to rip off his ghost sheet, and was upright and starting for the steps in seconds.  I jumped up - leaving my sword and candy - and ran after him, my pirate mustache barely hanging from the side of my face.  Billy fled his crumpled mask and spilled candy, taking the steps two at a time behind us.
As we spilled back through the front gate into the wash of a nearby streetlight, turning and screaming back up the street the way we’d come, I was vaguely aware of Little Bo Peep, a cheerleader and a fairy princess.
***
As we entered class the next school-day the hush was notable.  Then, the snickering and suppressed giggling and faintly whispered “screams” reached our ears.  Turns out the fairy princess was about to trick or treat at her elderly aunt’s house that previous evening and had already shared her story that morning in the schoolyard.
Nothing was ever the same again after that.

Posted by Carmen and Ginger at 6:06 PM