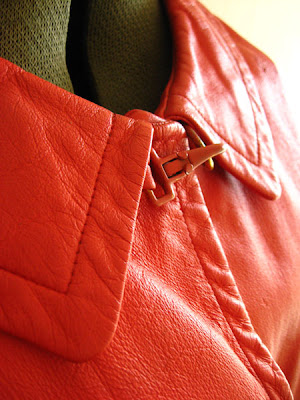 As a vintage seller, I often find items that I immediately recognize as something of value in the vintage world.  Some finds from the past year in that category include Miriam Haskell earrings, a 1970's Gunne Sax dress, a 1950's Vera Scarf and a Christian Dior Leather hat.  I would be kidding myself, and you, however, if I tried to act as if I knew every vintage name in the business; I certainly do not! 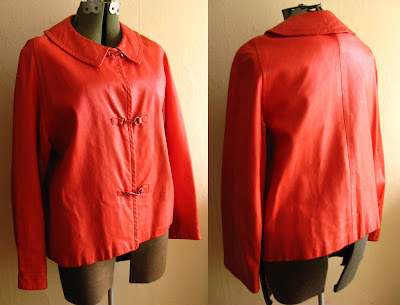 I do think I have a good eye, however, which has enabled me to find items such as Clare McCardell gloves and a Luis Estevez dress without being aware of the designers before the finds.   Such was the case with the Bonnie Cashin leather jacket I found at the local Salvation Army last night.  I was not even planning to go into the Salvation Army.  I had given a co-worker a ride home, and, came into the city from a different direction.  As my route took me down the same street as the retail store I decided to stop in for a peek.  Once I saw this coat I knew it was something special. 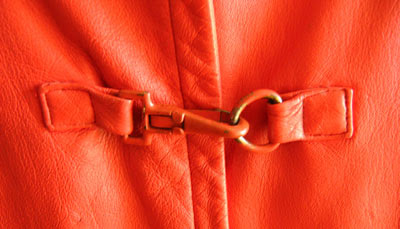 Fantastic smooth, soft leather in blood-orange with rounded collar, great long sleeves, coordinating silk lining  and this fantastic closure hardware that I quickly learned, via several internet resources, is referred to as a  "dog leash" connector in the Bonnie Cashin world.  She was known for transforming ready-to-wear sportswear for women beginning in the 1950's using unusual fabrics, shapes and hardware.  Her signature was the concept of "layering" pieces and unusual fabric combinations as well as use of unusual hardware such as these clips and the toggle connectors which she also introduced to Coach bags.  In fact, most people may know her name from Coach, as she designed the first Coach handbags for women in the early 1960's, leading that brand down the path towards the iconic supplier of women's bags that it is today. 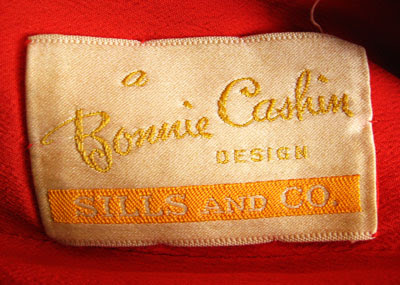 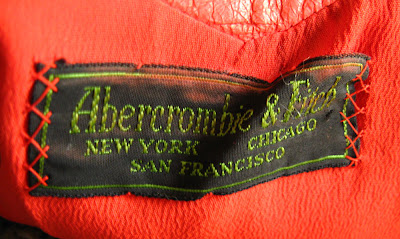 The coat was sold at the old Abercrombie and Fitch store.  The former, sporting and sportswear store that has since been re-branded into some sort of dark hypnotic discotheque with posters of semi-nude attractive youth that takes massive amounts of money from teenagers.   The Vintage Fashion Guild's label reference (a terrific resource for any collector) helps date the labels to the early 1960's.

I often post items on my blog that I plan to sell in my shop.  I must admit though, that I purchased this coat for myself and do plan to keep it.  If you see me on the streets of Providence, however, I will let you touch it.

Posted by Carmen and Ginger at 3:31 PM

Email ThisBlogThis!Share to TwitterShare to FacebookShare to Pinterest
Labels: 1960s, Bonnie Cashin, dog leash clasp, How Do You Know About That Stuff?, leather coat, leather jacket, orange, Vintage Clothing, Vintage Fashion, What Do You Keep?, Where Do You Find That Stuff?