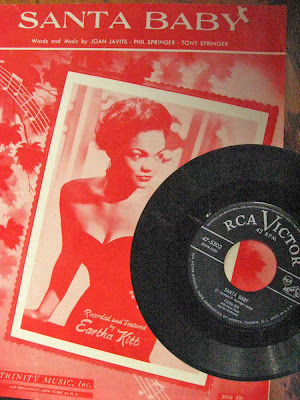 If you love vintage Christmas decorations as much as I do, it goes hand in hand that you should love vintage Christmas music as well and so I do!  Eartha Kitt's Santa Baby is a classic, and I not only have the recording on CD, but, own the original 45 and sheet music as well.  Eartha was a real original.  A woman of color with sexiness that scandalously broke the color barriers back in the 1950's.  Her sexiness continued right into the 1960's when she played Catwoman in the third season of Batman wearing a skin-tight suit with much success right into her 40's!  This recording is a classic, so I will include a video for those who are unfamiliar with the song or the woman:

I love to find vintage 45's of Christmas songs.  I'm not exactly sure why as 45's are sort of pain to play, they are so darn short and you are always running over to the record player to switch to a new song!  But I can convert them to a digital format and sometimes find some unusual recordings on 45 that you just don't find anywhere else. 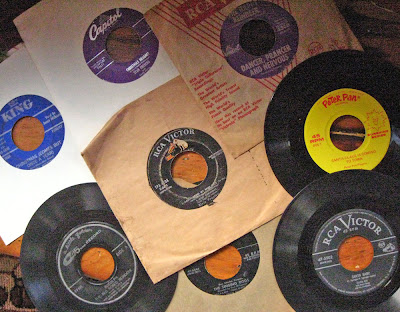 I find the Stan Freberg recordings to be quite funny.  And, aside from CD collections of his work, they are not easily found elsewhere.  That King recording of Charles Brown's Please Come Home for Christmas has a B-side of a rarely heard Amos Milburn Christmas (Comes But Once a Year) which is pretty slick as well.

One of the rare artists still recording today that can do justice to the older recordings, in my opinion, is Brian Setzer.  The guy can rock AND swing!   Here he is with a live version of Dig That Crazy Santa Claus which most people do not realize was actually a hit for Oscar McLollie & His Honey Jumpers in 1954.

So get out those CD's, dust off those records, and get the Christmas music playing!  You know you will love it the next few weeks but not want to hear another note of it by December 26th.

Posted by Carmen and Ginger at 6:21 PM