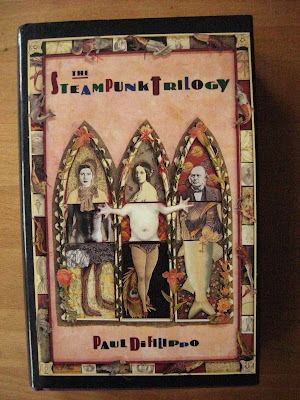 It seems five minutes does not go by lately without my hearing some story about Steampunk.  On-line stories about "Steampunk" items on Etsy; radio stories about "Steampunk" museum exhibits; and television stories about "Steampunk" conventions.  With each of these I laugh at the popularity of the term. Not quite twenty years ago, I was lucky enough to be hired by a small publishing company in New York to illustrate the cover of a collected trio of novellas by a Science Fiction writer named Paul DiFilippo.  The title? The Steampunk Trilogy.  At the time, few outside a small segment of the Science Fiction world had heard the term, and, I had no idea at the time that the term would evolve into the aesthetic movement it has become today.  The illustration assignment was a wonderful one for me. I had enormous artistic freedom, and, the material to work with was stellar.  When people ask me "How did you think of doing the (insert detail from image here)?"  I simply answer, "It was in the book!"  The book was wonderful, the illustration one of my best and it even landed me in the Society of Illustrators Annual and Exhibit for that year.  But by far the best benefit was my introduction to the author.  Not only as a writer; a skill for which millions already appreciate his skills; but as a friend.  I never met Paul while working on the first book.  I did, however, speak to him by phone when I was hired to illustrate the second book from the same publisher.  Following that, I finally met him and his partner Deb at a reading while I was working on the third cover assignment.  By that time, I had accepted a job in the same city where they lived and they not only connected me with an apartment but welcomed me with open arms into their occasional "family meals."  In fact, the very first time I stopped by their apartment after moving to the city, I found about 35 people at the house!  I was invited in, introduced to everyone and felt as if I were an instant member of the family.  This friendship is something that I cherish to this day, and, I just enjoyed an annual post-holiday brunch with Paul and Deb last weekend.

This, however, was not my "Steampunk Story" of the title.  My story has to do with the first time I met Paul's mom.  I cannot recall if it was that first day I stopped by or, a later date, but I recall that Paul introduced me as the "girl who did the cover of his book."  His mother gave me an up and down look and said something very gracious, I'm sure, but Paul realized that she had misunderstood and had to explain that I had illustrated the book cover, not posed for the book cover.  You see, Paul had just had another book released by a different publisher and his mother was trying to reconcile how I had managed the snake: 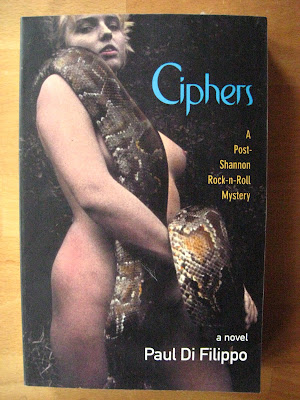 Posted by Carmen and Ginger at 5:03 PM