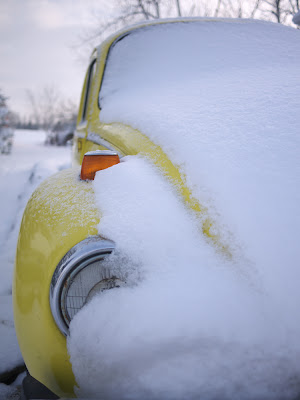 We've had more than our share of snow days this winter in New England and today is no exception!  With my office closed and my evening class canceled, I figured I would share a little snow story from my childhood.  I recall one storm, around 1971 or 1972, where it had snowed fluffy snow followed by sleet.  This caused a hard icy crust to form atop a couple of inches of snow.  At the time, my dad drove a Volkswagen Bug, and I was outside in my snowsuit, at about age 5 or 6, playing in the snow as he cleared off his car.  Given the odd nature of the snow, my dad - ever looking for a "system" - realized that he could break the icy layer into sections then simply lift giant slabs of ice and snow from his car in "bricks."  My recollection is that I saw a use for these, but, perhaps it was suggested by him?  In either case, I would take each curved "brick" as he removed it from his car, and started to build myself an igloo.  By the time he removed all the icy snow sections from his car, I had successfully built myself a nice little igloo, just large enough for me to crawl inside, with a nice arc to it courtesy the curved design of the VW Bug. 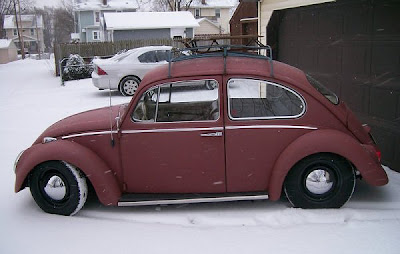 At this age, I was allowed a snack each afternoon and I recall asking my mother if I could have a "chocolate covered" as my snack.  A chocolate covered was what we called the vanilla ice cream on a stick that was covered in chocolate.  I have no idea why we called it this except that in those frugal times we likely bought the store brand which had no "cute" name and just said the facts on the box.  On that cold day, my mother was surprised that I wanted a frozen dessert, but, we had one in the freezer and she allowed me to have it.  I immediately took it downstairs and outside to my igloo.  I carefully placed it on  a "shelf" inside the igloo formed by an ice brick that jutted into the igloo.  I then went off to play, certain that my frozen dessert would indeed stay frozen.  After some time - what seemed like an hour to my small self but was likely only about 15 minutes - I returned to check on my snack.  I was delighted to find it perfectly preserved as if it had just come from the freezer.  To my young mind, this was an amazing trick, and, I felt pretty proud of myself for knowing that this would be the case. 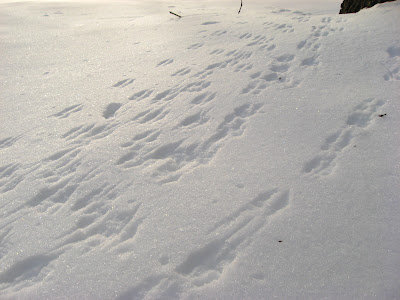 I wish I could end this story by saying that my continued interest in science led to a an established career in the field, with my name associated with many breakthroughs in thermal technology.  Unfortunately, however, my curiosity was - and is - continued but shallow!  I was just as curious about whether that would stay frozen as I was a few years later when I discovered that salamanders were often found under rocks near the water.  I was also interested in animal poop and the things it told us, how to develop photographic prints, what creatures would surface from a seining net and how to find stone that would contain fossils.  I am still interested in all sorts of things, still shallow but broad, and, I have learned to accept that.  If I could retain one thing from childhood, on this snowy day, I would wish to retain my love of a snowstorm!  In these days of adulthood and obligations and car clearing and places to be, it is no longer fun.   I am glad to say, following the last storm a week or so ago, my husband and I did some snowshoeing at a local cemetery.  I found myself carefully looking at all the animal tracks left in the snow, following them and identifying them.  Suddenly, I was a kid again, not worrying about what the snow meant to my house or my car or my drive but just enjoying it.  A cherished moment in this record-breaking New England winter. 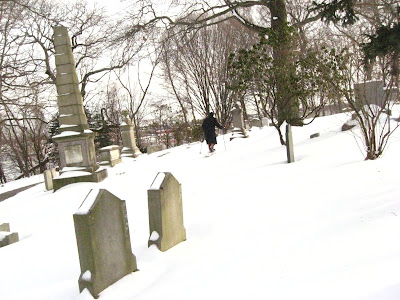