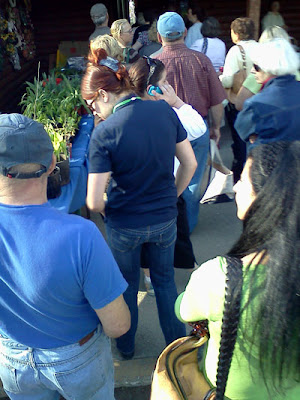 Everyone in the vintage biz knows about "the line."  Lines form in advance of the best church sales, school sales, flea markets and even yard sales with crowd control!  I usually do not mind waiting in line.  I do mind the antics of other people in line.  Why is it that adults at second hand sales and airports suddenly cannot understand how to form a line?   For instance, those two people in front of me in this photo of an annual sale from last night? They arrived AFTER me.  How they managed to get in front of me was a long process of sort of joining the line from the side, not shifting with others when the back of the line was directed to better hug the building and striking up a conversation with the people in front of me.  By the time we went inside, they were firmly ahead of me.  Luckily the woman who completely cut everyone in line last year decided to wait her turn this year.  I did, however, have the ever-present person behind me who arrives a half hour early, then, when there are still 15 minutes until the scheduled time for the event to begin, starts to complain loudly about how "They should just let us in." Of course, these are the same people who would be screaming if they arrived and the doors had already opened before the sale time.  I simply brought a magazine and snapped some pics as time passed to share here. 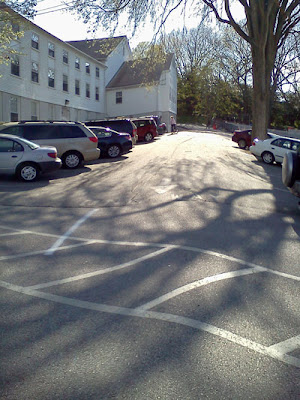 When I first arrived I turned around and snapped this photo behind me.  The event was scheduled to begin at 5:30 and it was about 4:55 when I took this pic. 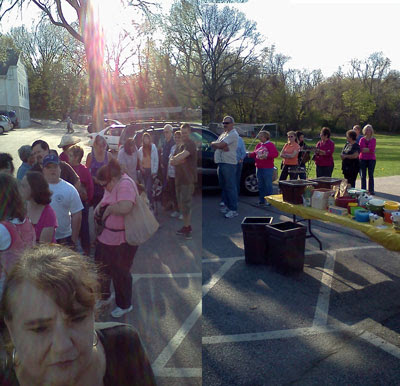 By 5:15 the line behind me had grown as you can see above.  (I cobbled two pics together to try and capture the curve from behind me all the way to the end. 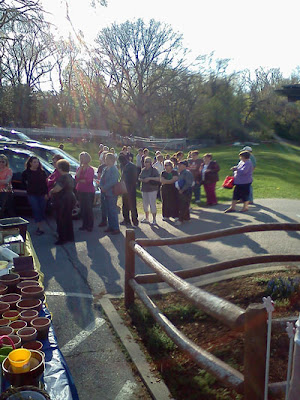 Close to the opening, at about 5:25, the line had shifted towards the door so my angle changed, and, the back of the line still grew!  You can see it stretching off into the distance of the field above. 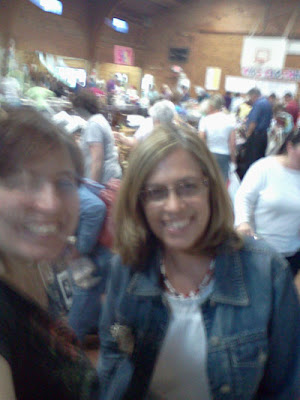 As is inevitable at these events, I was not in the door 5 minutes when I ran into someone I knew; this time, my friend Debbie from Vintage Haven.  Don't be fooled though, this photo was not taken when we first saw each other.  At first we said "Hi" then parted ways and continued to hunt.  Later, after we'd both exhausted the room a few times we were able to chat and snap a couple of pics.  You can get a glimpse of the mayhem in the back of this pic and the one below.  Thanks to Debbie for letting me snap these pics - she is very knowledgeable and her shop is fantastic, take a look at her shop on Etsy here. 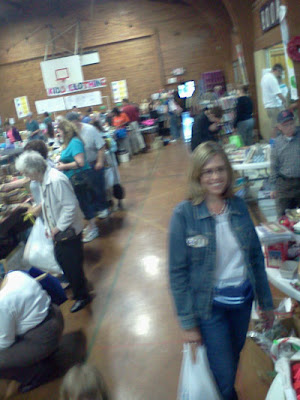 When you stand in line at these events, you have to decide where to go first.  At this sale, I usually head into this tiny little room near the door first.  It is usually filled with costume jewelry and often has some nice hats or bags if they have been donated (this is a school fundraiser.)  Unfortunately this year that was a bad call.  I went into the room first and it had almost nothing.  I glanced around as quickly as possible, grabbed a 25 cent rhinestone choker that I quickly peeked at through a baggie and tried to move on.  By that time, however, I'd wasted precious moments.  This was all too obvious when a few minutes later in another part of the room, Debbie pointed out to me the two great vintage tablecloths another woman had snapped up in the linens area.  Dang!  Should have gone there first.  You never can tell though, it is a combination of preparation, a good eye, swiftness and luck at these things. 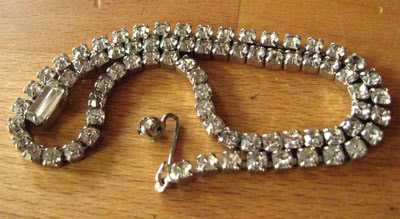 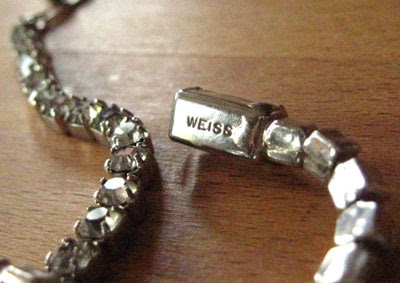 In a stroke of good luck, that little choker in a baggie turned out to be a Weiss piece. Yay! 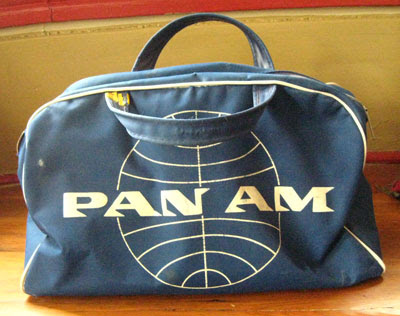 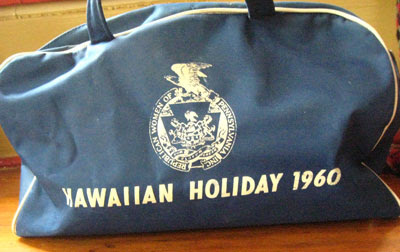 Probably my most fun find was this 1960 Pan Am travel bag.  This is actually the type of thing I typically find at this sale.  Unusual, but interesting and only a dollar.  You can't beat that!  I love that this actually has the date on it.  The sale was actually a wee bit disappointing compared to past years, but, I still had fun and running into Debbie made it all that much better. 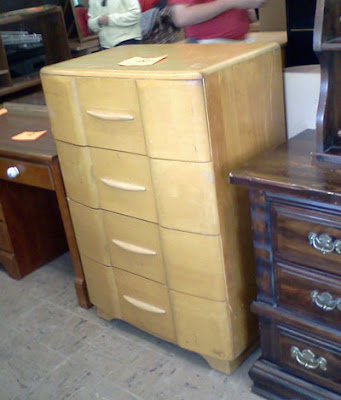 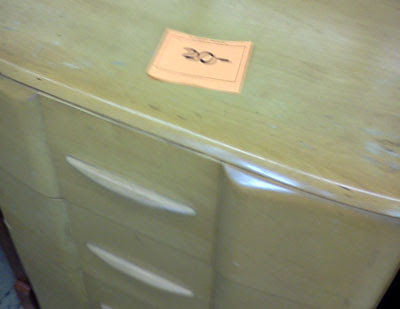 As an addendum to this post, I will tack on a little "Things I did not buy" addition from a Boy Scout fundraiser sale this morning.  Heywood Wakefield Dresser, $20.  Yup, $20.   I have no place for it in my house and do not usually deal in furniture so I snapped a pic instead and left it for someone else to find.  Why couldn't they have had the Heywood Wakefield credenza?  Now THAT I could use...hmnn...maybe next weekend????

Posted by Carmen and Ginger at 4:29 PM