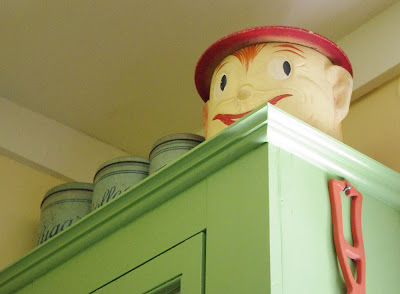 Today I had planned a very long and comprehensive how-to blog.  It was to be full of helpful tips, useful information and humor.  It involved the Flea Market, so when I arrived there at 6:00 this morning to find it was canceled for another event with no notice to anyone the humor, especially, never mind the helpful tips went out the window!   I had been planning, however, to post about my cookie jar collection so that is what I will do today.  They were all where they were supposed to be at 6:00 am and very cooperative with my taking their photos. 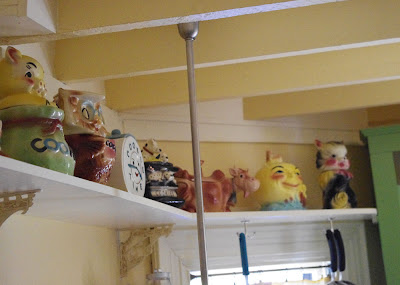 I resisted cookie jar collecting for many years.  They are so colorful and engaging, but, they can get pricey and they are so darn BIG.  Also, not everyone is as enthusiastic about cookie jars as you may be.  They have something of a "cutesy" stigma.  You may share with a friend or colleague who thinks your Heywood Wakefield is cool, that you also collect cookie jars, and you see them inhale sharply, look sideways and start to step away.  The flip side is that your friend's cousin Sandy hears about your collection and wants to talk endlessly about her collection of handbag-shaped cookie jars she has been buying off the QVC for years.

I collect what I like, and, what I like date mainly from the 1940's and 1950's, and hail from makers such as American Bisque, RRPCo and Brush McCoy.    I am the first to admit there are MANY ugly cookie jars out there.  Both new AND vintage; common AND collected.  As with any collection it is personal.  As a visual example, here is a summary of my reactions to three Humpty Dumpty cookie jars:

Now, you may or may not agree with me, and, could possibly have just the opposite reaction.  (My condolences if the latter is true.)  Collecting is personal, and, varies greatly even among collectors of similar items.  I collect on aesthetics, not, to complete a name or brand or series as some other people do. If that works for them it is fine with me, but, it is not how I collect.  Some comfort, as odd as it may seem, in justifying that my collection has some sort of "valid" aesthetic value lies in the overlap between my own collection and that of Andy Warhol.   While even he has some jars I would not touch with a ten foot pole, he also has most of my favorites, so I feel an aesthetic and cultural kinship with him in some way. (Plus, I met him once, but that's another story...)

For me it all started with this little Pig in a Poke above.  Found for $15 at a local shop about 11 years ago when I had not been long in Rhode Island, he was the tipping point.  I had zero, then, I very quickly had a collection (I define a collection as three or more of something...)

Not long after the pig I found the Magic Bunny at the local Salvation Army.  They wanted $45 and his head has been broken off and glued back on, but, I wanted him so badly I paid that and have been perfectly happy ever since!  (As a side note; if you are planning to break into my house and steal my valuable collection don't waste your time...I have an extensive collection of minorly chipped, cracked, repaired and decidedly NOT mint potteryware!)

One of my favorite jars in my collection is this beautiful original "Hey Diddle Diddle" from RRPCo (Robinson Ransbottom Pottery Company.)  My husband purchased this for me for my 40th birthday, about a month after which we moved into our current house.  I only got to look at this guy for about a week before he was packed away for four years!  I am finally enjoying him now...  If you like him, be aware that this popular design has been reproduced many times.  He should be the colors above, and, believe it or not, there is a legitimate version with gilded paint as well!  Reproductions are often misleadingly marked "McCoy" (not RRPCo) or in odd purple or too bright color schemes.  Here is an article about the topic with links to other resources if you are interested.

It's hard to pick favorites as I like them all for different reasons.  Above, a "Hootie Owl" from RRPCo was a find in a shop near where I used to work for $35.  I think my husband paid a lot more for the mint and hard to find "Peter Pumpkin Eater" from Brush as a gift at Brimfield for me!

I have quite a few, and, now that they are all on display I rarely buy more.  I did find that cute little Dalmatian Jar a few weeks ago at the Flea that I showed on Facebook, but, other than that, it will take something really fun and special for me to keep adding.  I think the $45 jar was the most I ever paid.  I typically pay $15 - $35 per jar, with some as low as $3 - $10.  It just makes it more fun to find a great jar somewhere that needs a bath but looks great cleaned up, than to pay a ton of money on-line for someone to send you something.  At least for me.  And I have bought a few on-line.  I used to troll eBay on major holidays that people had items ending when no one was on-line.  I would grab them for a song.  But I only did that a few times and no one is ever not on-line anymore!  Buying on-line is still a great option for people who do not have the time or the inclination to go poke through dirty stuff at flea markets and shops, so, I will provide some links at the bottom of this post as well.

Most of my collection:
Whew...that's almost all of them.  I actually do not own any cookie jar reference books so, if I have mislabeled anything send me a comment and I will update my post, thanks!  Below are some links to some fabulous (in MY opinion) cookie jar finds currently on Etsy:


Oh, and one final note:  Brush marks are sometimes raised, sometimes incised.  Often the word "Brush" is used and and sometimes a graphic of a painter's palette is used.  The marks sometimes do not say Brush, but, usually give a numeric code with the letter W followed by numbers, and, USA.  McCoy and RRPCo are usually raised or impressed marks into the bottom of the jar.  Abingdon is usually printed in block letters with U.S.A within a rectangle.  My Sierra Vista piece simply says "California" in block letters along the bottom.  American Bisque often has the letters "USA" raised or embossed into the body, along a bottom edge, but the tell-tale sign (they are never marked "American Bisque) is the wedge-shaped bottom you can see in the last photo below: 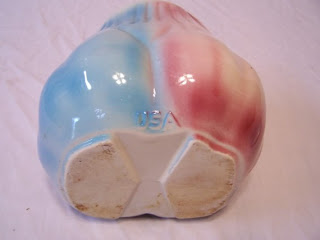 Posted by Carmen and Ginger at 3:27 PM

Email ThisBlogThis!Share to TwitterShare to FacebookShare to Pinterest
Labels: 1940s, 1950s, American Bisque, Brush McCoy, Collections, cookie jar, Etsy, magic bunny, pig in a poke, Robinson Ransbottom, RRP Co, What Do You Keep?, Where Do You Find That Stuff?