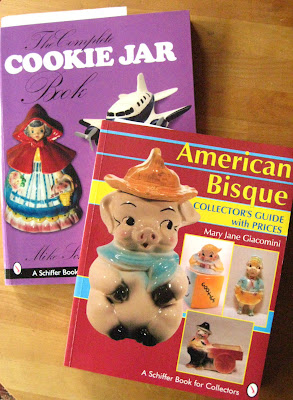 Back in June I finally posted about my cookie jar collection here on the blog.  At the time I mentioned I did not actually have a cookie jar reference book, and, no sooner had the blog post gone live then The Complete Cookie Jar Book by Mike Schneider arrived in the mail from my friend Jill as a birthday gift!  I accidentally opened it early, and mentioned it on Facebook, which was lucky, since evidently my mother had already bought me the same book as a birthday gift as well.  (at least two people read my blog...)  My mother said she had just received the notice from Amazon that it shipped when she saw the photo on my FB page - oops!  So, being the thoughtful person she is, she returned that book and found me the American Bisque Collector's Guide by Mary Kane Giacomini instead!  What great friends and family I have! 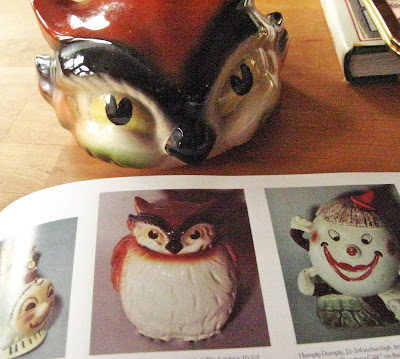 One of the first things I set out to do was to identify this cookie jar lid I found for a few dollars several years back.  I thought it had a great look to it, and, it appeared to be an owl, however, I could not find the matching piece anywhere on the web.  The cookie jar book enabled me to identify it as a Sierra Vista piece.  If you have a bottom and want the lid, or, have a bottom you want to sell let me know! 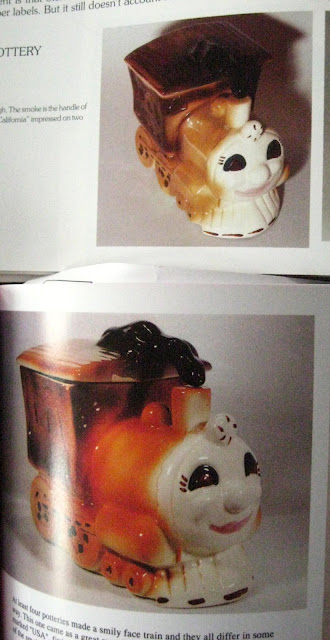 Speaking of Sierra Vista, having the book in hand made me less confident about my identification of my train cookie jar.  As you can see above, American  Bisque made one that looked almost identical as well!  I climbed up on a ladder and checked the bottom of my jar which is indeed marked "California."  Not "Sierra Vista California" as the one is noted as marked in the book, but, simply California.  So, the identification is not certain, but, I am fairly confident it is properly attributed. 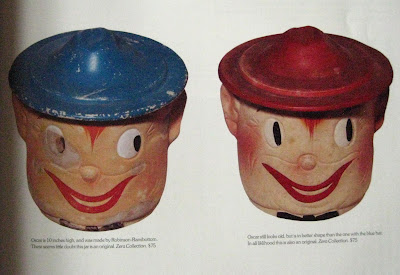 Having the books in-hand also enabled me to update some misinformation within the original post.  For instance, I own two of the cookie jars seen above, and, had identified the one in my post as a "Dough Boy."  These jars are in fact marked as "Oscar" jars and I had correctly attributed them to RRP Co.

I believe the "Dough Boy" name stuck in my mind because I had seen a soldier jar, in the style of the
"Brownie" shown below identified as a "Doughboy."  These round-bottomed jars with matte surfaces are still a point of contention with jar collectors.  For years it was thought these jars were RRP Co. like the Oscars.  New information, however, suggests they are American Bisque.  The debate roars on!
I also made several other corrections to the original post based on researching within the books.  The jar I refer to as "Hey Diddle Diddle" is referred to formally as the more well-known "Cow Jumped Over the Moon" by the author.  I identified the Peter Pumpkin Eater as 1959, the Rocking Chair/Dalmatians as 1961 and the Brown Cow as early 1950's.  The Brush Humpty Dumpties are known as "With Cowboy Hat" and "With Beanie" so I have updated accordingly.  Likewise, the Elephant jar I have is distinguished by his Sailor Hat as opposed to the Baseball Cap perched on a similar AB jar.  My cat jar has a name, "Fluffy" and the AB Owl is known as the "Collegiate Owl."  I was also a little off calling my "Milk Wagon" a "Cookie Truck" which is actually the name of a different AB jar. My biggest mistake, however, was in using the term "Brush McCoy."  This is a term I picked up years ago when I first started collecting art pottery.  It was generally understood at that time that Brush was also McCoy Pottery.  According to Mr. Schneider's book, however, McCoy and Brush ceased partnership in 1925, so, the combined names may be seen on early pieces but after that date they are two companies. 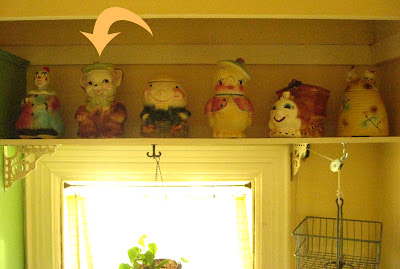 The most recent news is that last week I acquired a new (old) jar!  I rarely buy more jars these days, and, it is not something I look for, but when an adorable and mint American Bisque Bear is sitting on the shelf at the Salvation Army I take notice!  He was marked $34.99.  Sort of high for a "thrift score" but he was in great condition, super cute, and, my cut-off is $35.  He came home with me, I cleaned him up, scooted some of the existing jars to the right, scooted some others to the left, placed him in there and my husband never even noticed. 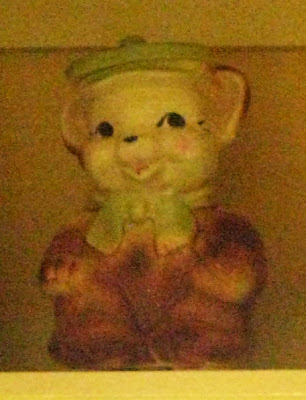 Posted by Carmen and Ginger at 6:31 PM